Many robot insects were living on a deserted Ringworld, an interstellar data storage drive. When Coop was training with Megas, Megas got caught in a mine field near the ringworld and crash-landed. When Coop accidentally activated the world's power, Kiva wanted to use the information it had on the Glorft and time travel to help her in her mission. The worms attacked Megas and a larva manage to get inside. Kiva and Jamie went down to assess the problem and repair Megas. The queen insect was feeding off the power from Megas' core and birthing more insect robots. Jamie managed to coincidentally destroy the queen. Coop fought off most of the insects, until the largest of them appeared before them. It trapped Megas in a web and tried to eat it. Coop accidentally activated a hidden capability inside Megas that destroyed all of the insects.

They are metal style dragon worms.  Some are small, some are large with wings. 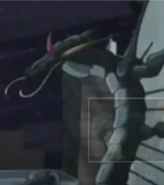