Red (the car head, some light and a few parts)

Megas is the show's main mecha, that the series itself is named after (or is it the other way around?).

Megas is the titular mecha of Megas XLR. An incredibly powerful prototype battle robot, initially created by the Glorft as a final blow to humanity, the MEGAS XLR (Mechanized Earth Guard Attack System, eXtra Large Robot) is customized and piloted by Coop, an overweight gamer and mechanic. Coop, along with Kiva and Jamie, use Megas to defend Earth from the Glorft and many other dangers they come across, albeit with over-the-top destructive results.== Megas is also known as: ==

Codenamed "Avatar", Megas was originally a prototype assault mech built by the Glorft as the coup de grace to the human race[1]. However, the Earth Coalition captured it and Kiva spent two years modifying it into a human-use mech as the last hope for the Coalition and mankind against the Glorft. Kiva installed a time drive unit, hoping to send Megas back to the year 3035 during the Battle of the Last Stand, humanity's last failed major offensive against the Glorft, and change the outcome of the war forever.[2]

Travel to the Past[]

As the Glorft siege of the Earth Coalition lunar base broke through the base's cloaking shields and defences, Kiva prepared to send Megas back in time back to the Battle of the Last Stand despite the doubts of her Captain. However, as Megas creates the temporal warp to travel through, the Glorft mech corps breached the lunar base and destroyed the defenders. En route to the temporal warp, Kiva began to transfer herself into Megas's cockpit through a tunnel connection with her personal mech. Under direct orders from Warmaster Gorrath, Glorft ships attempted to cut off Kiva and Megas by focusing their firepower onto them. Even with drone robots protecting them with energy shields, Megas's head was blown off by heavy Glorft fire and Kiva was forced back into her mech as the cockpit connection was severed. Megas was then thrown into the time warp and landed on the junkyards of New Jersey in the 1930s, where it lay malfunctioned and remained deactivated throughout the years until in 2004, Coop found, repaired and customized it, becoming the XLR (eXtra Large Robot) of today, with Coop's car serving as the replacement head unit.[3]

While testing Megas out, Coop and his best friend Jamie are attacked by Kiva and her drone mech escort, who had jumped through time to find Megas. Kiva falls into a state of exasperation when she was unable to convince Coop to give Megas back to her, and this turned into despair upon realising she can't pilot Megas anymore; Coop had replaced all the failing parts with ones of his own design. Moreover, he also destroyed the time module (not realising what it was) and the neural interface (replacing it with controls of his car and reserve controls of multiple gamepads). Since the only one who could pilot it now was Coop, she then decides that training him is the only choice she has left.

Coop, Jamie, and Kiva are then attacked by an entire army of Glorft mechs led by Gorrath, who seeks to recover Megas. With Coop's piloting skills, Megas defeats the Glorft, forcing Gorrath to retreat. However, the Glorft Commander informs Gorrath that they could not return to their time unless they recovered Megas and its time drive unit, not knowing the latter does not exist anymore.[4]

Now Kiva has to fix the time flux unit and train Coop in Megas to be ready to beat the Glorft once and for all, if Coop doesn't screw it up first.

When Coop accidentally warped himself and Gorrath into an alternate reality, Megas was captured by the Jamie of that dimension. It was taken back by Coop, but suffered severe damage from Evil Coop's attack.

When they go to Evil Coop's Fortress to battle, it then gets destroyed when Evil Coop stabs Megas with an energy sword.

However, Coop finds out about Evil Coop's past through Alternate Jamie and finds a better, upgraded version of Megas which was abandoned by his counterpart in favour of his current war-built mech and takes it as his own. He then devise a plan alongside Gorrath and Alternate Jamie to trap Evil Coop and Evil Kiva between dimensions.

Megas is a tall, relatively simple but studly designed war mecha, the majority of it's design is familiar to other Glorft's war mechs (due to being a Glorft prototype) but it contains elements similar to Earth Coalition's war mechs (due to reverse-engineering, and refitting), also there are some parts added by Coop as well as remove some. The Prototype version was certainly painted like other Glorft mechs: military green, metallic grey, brown and yellow stripes, it also obvious that the Prototype Megas had many more Glorft mech features like a neck comming out of the upper chest, streight back fins, blockier biceps and quads, the right arm was a gatling gun, the other had three fingers like the Glorft themselves. The Earth Coalition redesign removed many Glorft features.

Being the ultimate homage to everything Super Robot, Megas is an extremely powerful battle mecha, possibly the most powerful one ever built. Measuring between 24 to 36 meters tall (see Trivia), it was built with impressive functions which are constantly being modified by Coop and Kiva (but mostly Coop). It is practically capable of anything, as listed below:

Giant Robot Physiology: Megas is a Piloted combat robot car it's customized and piloted by Coop, an overweight gamer. Coop, along with Kiva and Jamie, use Megas to defend Earth from the Glorft and other dangers.

Black Box Internal Security Grid: Mentioned in DMV : Department of Megas Violations, which Coop accidentally destroys thinking it was not important. Its implied purpose was to prevent any unwanted persons from hijacking Megas.

Duatronium Isolinear Actuator: It acts like the Matrix from Transformers, it may have the role of keeping vast ammounts of knowlegde and data that helps megas computer unit

CPU Core: The most desired part of Megas, it's the one that makes Megas unique compared to other mechs 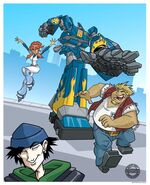 Megas docked at the lunar base

Kiva performing pilot transfer from her mecha to Megas

The moment Megas's head was lost

Megas as it was first discovered by Coop

Megas at an auto show 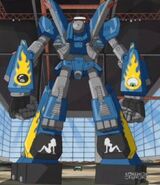 Back shot of Megas, note the pinup decals Megas is in the auto show

Megas as it appears in FusionFall

Megas as it appears in FusionFall 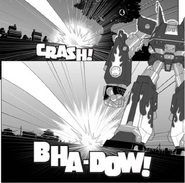 Megas from the comic Worlds Collide 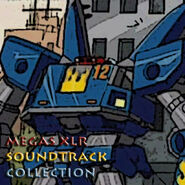 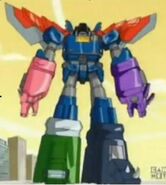 Megas combined with the Zorps

Megas introduced to the Ultra Cadets

megas get lift off with coop and his friends

megas in time out on cartoon network action pack #4

It creates a lovely deck to sit on (complete with shade)

Lasers bounce off of its body

Gets flicked through some buildings by a giant-er robot 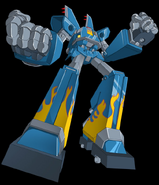 The grass is always greener

Megas XLR vs the Universe

Megas XLR Poster was on the door in Two and a Half Men. 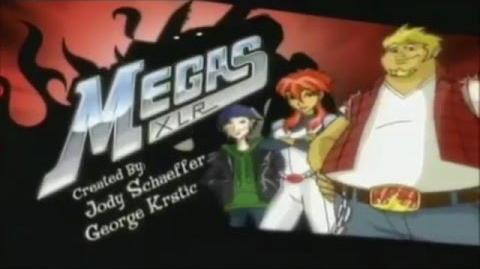